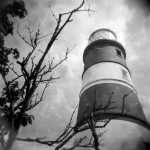 Travelling from one lighthouse to the next, Alighting Shores’ performances will stand as a mapping process, connecting the landmarks of different coasts and countries, in England and further afield.

Alighting Shores is an innovative project piloted in 2013 with Disappearance at Sea, a performance in and around the iconic Happisburgh Lighthouse (England), thanks to the support of the Norfolk County Council and the Rebecca Skelton Fund. Disappearance at Sea‘s video trailer is available here.

“I was transported in a more meaningful landscape”
Matthieu Delattre – in response to Disappearance at Sea.